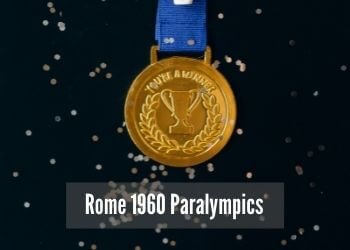 From 23 nations were participated with 400 disabled athletes in 57 events in 8 sports. The following sports were played in the Rome 1960 Summer Paralympics:

At the 1960 Paralympics wheelchair basketball competition, the United States won the champions; Great Britain titled runners-up and Israel took the third-place from men’s class A event.

On the other event in men’s class B, same as class A the United States won the gold medal, the Netherlands took the silver medal and Great Britain won the bronze medal.

1. Tommy Taylor, a British table tennis player, won the gold medal in the singles A event in the Rome 1960 Paralympic Games.

3. In a snooker sports competition at the Rome 1960 Paralympics, Cliff Keaton won the gold medal, Michael Shelton got a silver medal. Both Giovanni Ferraris & George Portelli were won the bronze medals at the 1960 Summer Paralympics.

4. At the 1960 wheelchair fencing competition, Italy was an unbeatable winner with 3 gold medals from 3 events.